Mr. McHenry (Bonhomme Jouvence in the French version) is one of the residents in the Magic Garden where he is a elderly gardener who rides around in his tricycle.

Mr. McHenry is a optimistic and caring gardener who tends to his flowers in his garden or shed. He spends time with his friends in the Magic Garden such as Mr. Rusty, Florence and Dougal where he helps them with all sorts. He is also very good at playing the bagpipes, though in one episode, the bagpipes were cut open to let rainwater come in so he can water his flowers.

In the French version of the original series, his personality is much more of a youthful character, hence his French name "Bonhomme Jouvence" which translates to "Mr. Young". As a result, he also has a verbal tic (and catchphrase), "Hep, hep hep!", which somewhat translates to something speedy like "Go, go, go!". In the color episodes, he even has a female voice actor (Pascaline Priou).

In the original series, he wore a red sweater, trousers and sabot shoes underneath a blue apron and wore white gloves and a beige brimmed straw hat with a brown band.

In the revival series, he wears a brown sweater underneath a green apron with a white front pocket that has a design of a small rake and a trowel on the front, blue trousers, magenta boots and a white brimmed hat.

In the film, Mr. McHenry first appears when Dougal is riding on the train to meet with Zebedee. The dog asks him if he heard anything strange the previous night, but the gardener says no, saying he has his garden to tend to. He later appears with Mr. Rusty at Ermintrude's art exhibition, where they both tell everyone how worried they are about the sudden appearance of blue cactuses in the garden. He and Mr. Rusty are also the first two to be captured by Buxton's army, and taken prisoner in the factory's dungeon. He's chained between Dylan and Mr. Rusty, with his tricycle parked behind one of the stalagmites. He later watches as everyone else cries during Florence's sad song, before Dougal arrives, having come to rescue them, disguised as "Blue Peter". However, before the dog can do so, he and Buxton are sent by Madam Blue to conquer the moon, but there, Dougal's true identity is eventually revealed.

Later, Dougal returns to rescue the others, and Madam Blue strikes a lightning storm in the castle. A lightning bolt strikes through the chains around Mr. McHenry's hands, making him the third of the gang to be freed, and causing him to spin back on his tricycle. At the gate, Mr. McHenry arrives first, struggling to push it open, before fleeing back to the garden. Back in the garden, he cries over Brian's supposed death, but rejoices when the snail returns with Zebedee's mustache, which had been stolen by Buxton. The gardener then uses magic to make it snow around the garden, and joins his friends for a ride on the roundabout. 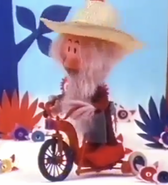 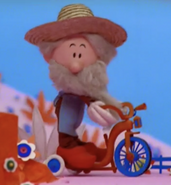 Mr. McHenry's third series 2 model, as used in "Stiff-Necked Heliotropes", "Golf and Omelette", and Dougal and the Blue Cat only

Starting with the dungeon scene, Mr. McHenry's eyebrows are changed to show a distressed expression. Oddly, they remain this way for the rest of the film.

...which would only receive minor alterations, including thicker hair.