The Magic Roundabout Wiki
Register
Don't have an account?
Sign In
Advertisement
in: Characters, Females, Animals,
and 2 more

Zeebad
Soldier Sam (former)
Ermintrude (Azalée in the French version) is a sassy anthropomorphic cow and an opera singer.

In the original series, Ermintrude somewhat harbored a somewhat subtle crush on Dougal, and has outsmarted him on several occasions. Also in the original series, Dougal was initially frightened of her, to the point of climbing up a tree and hiding in the train van during their first meetings. Nevertheless, the two are still good friends, and despite constantly making fun of her, Dougal has sometimes gone out of his way to do nice things for her (for example, putting on a fireworks show for her birthday).

In the 2007 reboot series, she has a bit of a crush on Brian (who had a crush on her himself in the 2005 film, which she didn't take notice until the end of the movie).

She and Dylan also seem to share the same passion for music, despite liking different genres. Both of them also share similar artistic talents, particularly painting. In "Sugar Shortage", they both teamed up with Florence to stop Dougal from using a machine to turn Ermintrude's daisies and Dylan's carrots into sugar.

Ermintrude is a matronly and operatic cow that lives in the Enchanted Gardens who loves to sing opera at the sound of her own voice and being the main attraction, as well as like to eat flowers in the gardens. Although she likes her friends where she would call their "dearhearts", Ermintrude doesn't take kindly to rudeness, particularly from Dougal and would often get enraged where one instance shows that she nearly went after Dougal when he insults her whilst playing the piano in Zebedee's orchestra. As much as she likes to sing opera, Ermintrude would sing too hard and too loud and this would result in glass shattering, or in rare cares, cause icicles above to fall where this happened when the group are setting camp for the night prior to finding two diamonds.

Other than singing too loud, Ermintrude would scream so loud whenever she is pain or in fright where an example of this would be screaming at the sight of a pair of mice that Florence found when planting her strawberries. She is also very enthusiastic which can sometimes make her feel vain and want to show off.

In the original series, Ermintrude often loves being around the Train and watching it pass by. In Dougal and the Blue Cat, she is shown to be talented in painting. Compared to the reboot series, Ermintrude has more of a ditzy personality, especially in the French version where she would often mis-pronounce everyone's name, especially Dougal's. (Since this happens on a regular basis, the frustrated dog would only clarify her on occasion. The other characters don't mind and are used to this, although Brian has corrected her at least once in "Can You Play Cup and Ball".) She also has a big appetite (which Dougal jokingly compares her to a lawn mower in one episode), but during series 3, she becomes sensitive about her weight and gets upset whenever she gains more pounds (this becomes the focus of two episodes, which Dougal tries to "help" her). Also, during season 3, she gains the power to glide (through Zebedee's magic), which she often does when she's excited or in a hurry.

She wears her blue brimmed hat on her head that has a pair of holes for her horns to stick out, and a red neckerchief with an emerald fastener. In the original series, Ermintrude is rarely seen without her hat off, but this happened on three occasions, twice in series 2 ("Ermintrude's Hat, Part 1" and "Ermintrude's Vocation"), and at least once in series 3 ("Traffic Block and Road Race"). Both seasons portray her with different hairstyles. (In series 2, she has short fancy hair with a bowtie, whereas in series 3, her hair is very long.) She is seen without her hat more often in the reboot series.

Pretty much every episode except for these: 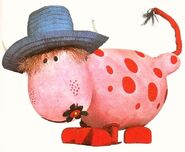 Ermintrude's original model design for series 1 (original series). Her hair is messier compared to later models, and she has a black flower in her mouth. 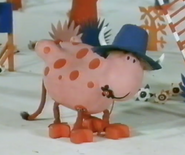 Ermintrude as she appears in the first half of series 2 (original series). She mostly remains the same, except she has a bigger smile and her hair is a bit more hidden.

Ermintrude's second design in series 2 (original series), giving her larger eyes and a more cartoony appearance. (This design has her munching a blue flower instead of a black one.)

Ermintrude's third model for Dougal and the Blue Cat as well as late series 2. Her eyes are slightly shifted back up near her hat again, and she now munches on a white flower.

The previous model was used again for series 3, except the eyes become a bit shorter. Also, this is the first stop-motion version of Ermintrude to blink.

A quarter into series 3, her hat is shifted so her eyes are more exposed, allowing for more expression and making her look more cheerful. 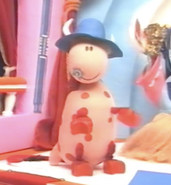 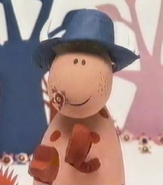 Making a bed for Buxton with Brian

A now-freed Ermintrude joining her friends at the roundabout... only to slip on the ice 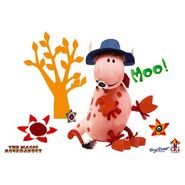 Postcard from the 90s 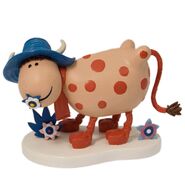 Publicity still of the final stop-motion model from series 4, which was used as the basis for creating the CGI model for the 2005 film

CGI prototype model for the 2005 film (used for publicity only)

Ermintrude as she appears in the revival series. 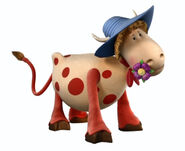 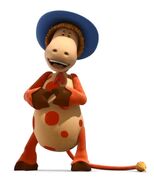 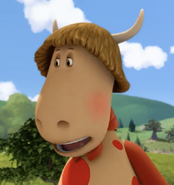 Ermintrude without her hat, as seen in the reboot series 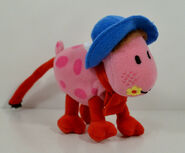