Buxton Zeebad
Soldier Sam (former)
Dylan (Flappy in the French and American versions) is a laidback, lazy anthropomorphic rabbit who plays the guitar. At the end of every episode of the reboot series, Dylan says, "I wish it was time for bed!" and then falls asleep.

Dylan is a laid-back and a sleepy rabbit who lives in the Enchanted Gardens and would often drift off to sleep from time to time. He doesn't like getting woken up from his sleep or being disturbed from his work - i.e. creating a sculpture of Dougal. Given that Dylan is very laid-back and easy-going, he rarely flips his lid, except on a few occasions when facing Zeebad in the final showdown. Earlier black-and-white episodes show Dylan as a innocent kleptomaniac, including a time where he unintentionally stole some strings holding a tent that Dougal and Brian put up to surprise Florence.

As well as being tired or sleepy, Dylan would be completely active with different basic forms of martial arts that he learned where he takes down the gang of evil skeleton guards without breaking a sweat. Dylan would also feel depressed and devastated at times, such as when he sees the moon slowly disappearing as each night passes or when his sound system and lighting that was going to be used for his big gig ends up wrecked, but his friends, including Florence, are always there to reassure him and restore his spirits.

Dylan is a tall light brown rabbit with white hair on top of his head, sideburns and tail, and half-closed brown eyes. He wears a yellow long-sleeved shirt underneath his blue waistcoat and blue trousers.

In the original series, he wore a white cravat and white gloves. 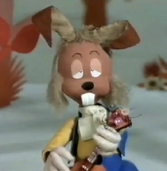 Dylan's second model for series 2 in the original series.

Dylan as he appears in the revival series.

"Sorry, I don't believe in violence... except in self-defence."

Add a photo to this gallery
Retrieved from "https://the-magic-roundabout.fandom.com/wiki/Dylan?oldid=5437"
Community content is available under CC-BY-SA unless otherwise noted.